Use Me, Abuse Me 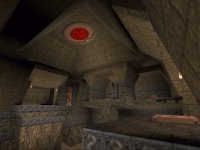 Peek has released his first Quake map, which kind of surprised me given how long he has been in the Quake scene. Anyway its a medieval style map. The layout is pretty simple. The central point of the map is the area in the left hand shot which connects out to two rooms, one of which is in the right screen shot.

Looks wise I found it a little repetitive. I'm not keen on the old castle type textures and some of the architecture seems duplicated a little too much.

I also didn't enjoy playing the map much either. I played it a few times in 1-on-1. First time round I took a total trashing from a bot in 1-on-1. Next time I whipped its ass 50 to 9. Then I played Kable. Slightly odd game. It was more even in frags, but it was still a case of frags being quickly racked up by one player whilst they had the Quad. My tactic here was to get one Quad then quickly go get the other as to stop Kable from having

it. Dominance of the map did swap being the two of us as we used this tactic. I can’t remember a time when we actually both had a Quad in our procession.

In FFA it was a complete mess. Getting frags was very easy but I didn't feel like I was doing that much to obtain these kills. I was just randomly pumping out rockets and grenades.