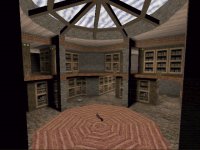 After the really rather good Medication Time, rocketman comes back with uninspiring piece. The layout is simple, it centres around a big octagonal room with four rectangle shaped rooms off. When I loaded the map I was a little disappointed to see this huge open space in front of me (see first piccy). After a bit of strolling about things weren't much improved. Two of the four adjoining rooms are simply copies of each other, which are made up of a stair case at the back with a few book shelves in between. The other two rooms are a little more interesting, one is pictured in the right screen shot whilst the other is room with eight computers in. One of which shows one of rocketmans previous maps, fragfest, being played.

I haven't mentioned it yet but texturing is good. The book shelf texture is used a lot, but you'd expect that since it is a library. I do like the little letters indicating the sections, even if half of the alphabet is missing ;). The sky texture is quite nice. That is when its looked at from a distance. Its basically a light blue background with lines of white cloud in the foreground. When you get close to it (and you can, I'll explain later), 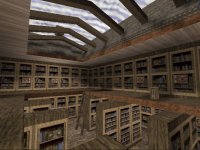 it gives of a horrible striping effect. Not nice on the eyes.

The bots have absolutely no problems navigating this map. So much so that the little buggers found the secret teleporters before I did. My hint is this, if you see a dark coloured book shelf, shoot it. There are two of these teleporters and both have the same effect. They drop you in the sky areas at the top of the map, which is where a MH is placed. These two MH's which are at the top of the two places shown in the screen shots.

Despite its simplistic layout and architecture it is a frantic map to play. As the numbers suggestion its a FFA map. The recommended 4 to 8 bracket is where all the fun is.