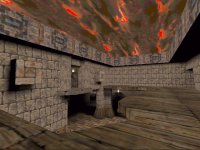 YOOM! What the does that mean? Its original that’s for sure. Style wise it takes leaf out of Excessus's book and looks very much like exdm2, which according to the author is "Hexen2 meso-american". Nice. I also see the sky texture from Vondur's Zed in here as well, which doesn't really work too well with the rest of the map.

It is unfortunate then with such good textures that the brush work is substandard, as is the scale of the map. In some places the walls seem to hug the player giving the impression that your elbows are scrapping along them as you m 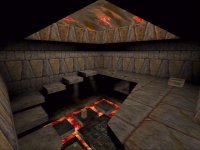 ove about. In other places there is an abundance of room.

There are some interesting touches in the architecture department such as the slanted wall bottoms but for the most part its all very blocky. Texture usage is pretty good as well, there are some problems but the majority of it is fine. There are also lots of dark shadows which were very present in GLQuake, so in software I can only imagine you'd need a flashlight.

Like with The Ethel Matrix the MH is in a central placing, right in the middle of the main atrium. This lends itself to FFA, since anyone can just swoop down and get it. Its an interesting map to play. Very easy to get into. Maybe a little fiddly to move about in sometimes but it works well as a FFA map.