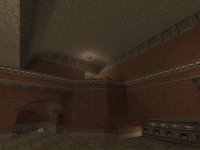 When I heard Cybear had released a new map I was pretty exciting because, Cybear’s last map Knark i Kaffet (4.5/5) was well received when Pingu reviewed it. I thought this map would be up to same standard. Unfortunately that is not the case. For a start its kind of a giveaway that a map isn't up to scratch when the author calls them crapdm. It could be sarcasm on the authors 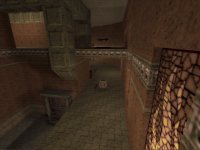 part, but its not. Considering we know how good the author is, it's a big disappointment.

I should stop my rambling though and explain the map. Its pretty similar in style to Blood Run - ztndm3. Some of the finer details though are a little lacking. There are quite a few indent strait glass windows but that’s about it. The architecture is very flat. A few curves are thrown in there but really do nothing. Part of the layout is fairly symmetrical but it suffers from being pretty boxy.

It does play well but its not much consolation. Who wants to play a map if it doesn't look good?