SanTzue: the art of war 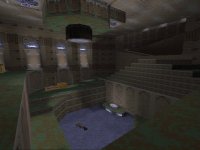 After creating a brisk and breezy map in the form of Shall I compare thee to a summer's day. That map a light orange and yellow sky giving the impression of summer in the otherwise gloomy world of Quake. With this map he returns to set a distinctly moody piece. Style wise it again takes a whole bunch of Quake 2 textures as it paint. The textures do look a bit iffy and some look to have not made the translation across not to well. Some of the colours look over done.

The architecture makes it look like some kind of hidden temple. The scale makes it all seem big and very open. Lighting is some what intriguing. Some areas are basked in huge clumps of bright light where as some sections are covered in dark shadows. A closer look did show that the lighting went across the map. So where as it was light as one end due to the open windows there, the other end was in shadows.

The architecture does seem to make the layout more technical and complicated than it actually is. Basically its made up of two levels. The lower can be seen in the first screen shot, the second shot shows the layer which is directly above the area in the first shot. There is a little more to it, in that it go 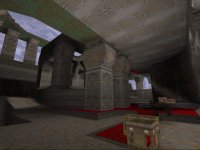 es across to an open window type area. It also very well connected up, and teleporters also help out here. There is a jump pad located in the right corner of the first screenie which drops off on top of the square column area.

Now on to how it plays. There is something that I just don't like about it. Its the rather fiddly architecture that got in the way. Lots of slants and slopes and I just didn't get to grips with it. It required a lot of hopping and jumping about. It ended up being a pogo stick match with both of us bouncing up and down like mad men. I think its an acquire taste playing like that. That is not to say it wasn't fun, it certainly was but after a while it got on my nerves.