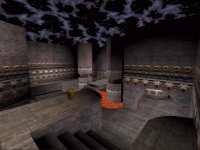 If you're already got this map and read what Prod said on the Qboard you get the impression that he wants to distance himself from the map. Why I ask? Well it becomes apparently fairly quickly. The map seems to really lack something. It seems empty somehow.

The layout is very flat and the architecture is fairly uninspiring. Some curves have been thrown in there to spice things up but it doesn’t really do much.

It is funny though because I did really enjoy playing the map. Technically it shouldn't work. Too many dead ends and such like, but it does. 1-on-1 wasn't too good. FFA was a different matter though. Fair more entertaining and at times frantic!

Item placement is ok. Maybe too many of the weaker weapons in predominant areas but it does make a change. I thought the Quad placing was pretty cool. Its on top of the far column in RA area, hidden away in the shadows. A couple of rjumps and you're laughing.

Now I do have quite a few problems and niggles with the map. It annoys me even more because I tested this map and made a number of suggestions. First up is the ring of shadows room which serves no purpose other than to house the aforementioned power up. The jump pads are improved in that you can get of them now b 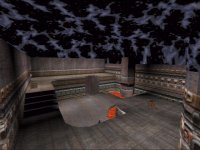 ut there are just too slow for me. You fly up ok, but then you float gracefully down onto the ledge in front of you. The problem here is that you have practically no control here. To extra picky there is also a wall texture that is particularly out of place. See the second screen shot. Its the back wall there. It looks daft.

Its a contradiction in terms this map. On the one hand its enough to play once things get going but there are to my mind lots of little niggles which at times detract from the fun.