The Tower of Kadath 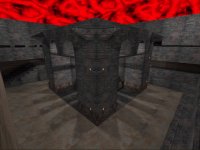 First impressions of this map were mixed. You see I started off in some plain ass corridor with a round globe emitting light at me. Not impressed. I then happily bounced along to the end of the corridor and then was completely blown back by the HUGE construction in front of me. I actually quite liked it from the distance I was at. Then I realised that this was the map. Basically its a courtyard with surrounding corridors. In the middle of the courtyard is this tower. Weaponry is stored in some side corridors. It kind of like an organised shooting match. Everyone has to go to this one place, pick up their guns thenall get out and then start.

Now I thought I'd check out the r_speeds and wasn't particularly amazed to see it hitting the 1000+ mark. Taken in context though, this map was apparently made for use on a LAN party and with machines all using GLQuake so its not like was meant to suffer from slowdown.

My opinion now of the map is that it isn't very good at all. The architecture is on the basic side, the only reason the r_speeds are high is because of sheer scale of it all. Good old Quake doesn't like big open spaces, corridors are much more to its liking. Unreal seems to the engine of choice for big wide open boring spaces (dig, Shambler =p)

Its also a numbers map, the more people the more fun. Which is contradictory because there aren't many items to support much action in here.

Probably the most interesting thing about this map was this piece of text from the maps readme file: Too often in these later years of Quake play, people make maps because they can. They look nice, play well, and are loads of fun reg 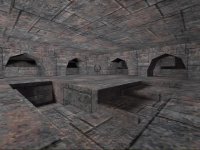 ardless. The Tower of Kadath was inspired by mental landscapes conjured from the stories of H.P. Lovecraft. His work inspired many aspects of Quake itself, such as Shub-Niggurath, Cthon (possible bastardization of Cthulu?), the map "The Nameless City", and more. Kadath attempts to give players access to several playing styles, each interconnected with the others. Initially this map was going to be for private lan play, however enough of the players liked it enough to suggest I release it. The r_speeds on this map get can get very high, but it played smoothly enough (or maybe no one lived long enough to notice). At any rate here it is, unaltered. A version optimized for net play may show up later.

So that explains the big spiky bits on the tower! Now the question I ask is how the heck do you optimise it for net play without destroying it? (If your answer to that is "That would be good thing", then I we agree)