Crapdm03 - It's raining gibs and dogs. 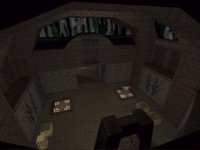 The third crapdm map is the best so far. Styling wise it takes a leaf out of Headshots book and looks decidedly similar to Dead and Agenda. The layout is very compact though. Very close quarters. At first I thought I wasn't going to like it, but actually I did.

Its a pretty good 1-on-1. Lots of teleporters to give you clues as to where the other player is. There is maybe a little too much ammo in there but thats not really a problem. In FFA its good. Maybe a 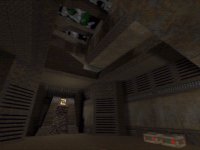 Some of the architecture is very nice, see the first screenshot for an example. This also leans to another problem. Getting lodged in the upper area of that map. My curious side told me to see if I could get up there. The unfortunately thing was that I could and got stuck netween the sky and one of the curving roof beams. I thought clip brushes would have been placed in there to clumsy idiots such as myself from getting up there. Once again it smacks of a lack of testing and finishing properly.

All in all its a good map, but it didn't exactly do anything for me. Nothing new to grab me back for more.