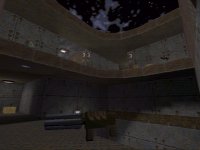 So here we have the second crapdm map.Like the first map it has been made in a day. Styling is thankfully different but again it suffers from a complete lack of detail. Its like the first coat has been, the layout created, main items placed. Now we're wating for the second coat of detail to give us that visual impact.

Unlike the previous map there are a couple of things that are annoying. First of is a wall in one of the lift shafts, it sticks out which I know is down on purpose, but you can hit in on the 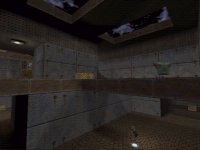 way up on the lift. this means you get hurt and sent back down to the bottom. Making it func-illusionary would have been so easy. It seems like some simple play testing would have solved that one. The second thing is some misaligned textures. Now maybe in the rush to get it out in a day this was negated. Well it shouldn't have.

Bitching aside it plays well. Thats something I can't fault, but it isn't exactly brilliant to play. Its enjoying but doesn't last for long. I must mention though the jump chute which is similar to that in xl1dm4, its nicely executed and adds nicely to the map. Unfortunately I have to say that again I just can't help but think this is another missed oportunity.