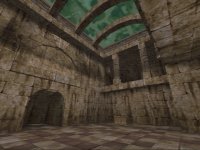 A change in style for Ken's next map. He uses some Unreal textures to create an ancient deserted temple. At first I thought it looked really cool what the pieces of falling ruin and archways and such like After awhile the overuse of the main wall texture became very, very monotonous and damn hard to look at.

Playing this map didn't really interest me. The layout seems very odd and unlike kikdm3 some of the upper walkways are pretty narrow and give little room for movement. Even with a route file the bots seemed to disappear. One minute an area would be full and bustling with gun fire, the next completely empty, and this was with 6 in. I really didn't get to grips with it all.

Lighting is some what messy. In software it doesn't have a consistent feel to it. In GL the shadows are mostly gone but it still doesn’t feel right. 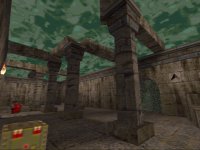 ew Textures : Only jiggery pokery by MickeyJ and myself. Erm... I'd swear these were textures Excessus used! I checked the bsp and indeed there are, exactly the same texture names as in exdm3 (exce24, exce19, etc). Excessus confirmed this. It would be nice if you gave him some credit since he did get the textures in the first place.

for newcomers, i have to explain Kickin was never meant to "stole" something... he just never payed attention to grab some textures from here and there. He emailed me and everything is okay... plus, this map ROCKS! =)