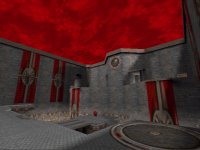 I saw a screen shot of this map on Pingu's site and thought "Wow" what a cool map! Style wise its Quake 3 Arena inspired. A load of textures have been ported over form the test to help decorate this map. They've ported over pretty well, but a couple do have a decidedly fuzzy quality to them. Also some of the Strogg flag textures are used and its good to see they are actually func_illusionary so you don't get stuck on them.

Now my initial impressions though were changed a little though when I actually got my hands on the map. There are indeed some very nice set pieces and the curved archway off to the right of the second shot is excellent. But some of the architecture is a bit on the crude side. Its seems a little rough in places, with some brushes not lining up properly together. Also texture alignment is a tad messy with some pieces not really matching up together.

I also had an rjumping session in which I managed to get onto the upper sections of some of the rooms, much to my amazement really. Some clip brushes up there to stop this would have been a good idea. There were some ideal camping spots up there.

I was further disappointed when I started to play the map. Now in 1-on-1 against a bot it was horrible. I played for nearly an hour and the poor bot had a negative score lurking in the 30 region. The poor guy was just completely confused by all these bounce pads and lava. The main reason for his minus score was because of his efforts in trying to get the RA. I did see him successfully get it on a number of occasions, but its stumbling block was getting back 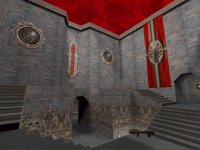 from this hovering platform and back on to main chunk of the map. It seemed to diver and ponder and then eventually dive feet first into the lava.

Against a human player, its not a problem. Navigating is easy. But you see its a big map, and as such 1-on-1 is boring and tedious for someone who likes a fast paced game. FFA balances the books nicely and this played a treat. This time round the bots weren't on their own, so hardly ever when toe dipping in the lava.

The bounce pads are faithfully conveyed. A little brutal on the movement side, but they don't do any damage so thats not really an issue.

Now I'm not sure, but I'll don't think this map was beta tested properly, if at all. There are so many minor niggles and problems which could have been fixed during testing. The potential for this to be an original and excellent map was there but it was just not grasped.