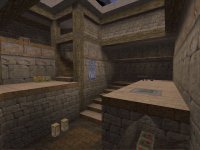 Wow. What an amazing map. My first impressions were that it was a little iffy. I'd spawned in the area shown in the second screen shot and was less than impressed. After a couple of minutes of wandering around and looking at things my opinion quickly changed. Visually its all very nice, a subtle change from Back 2 School, but not that different. It has a some medieval type architecture which looks really cool. Lighting is ok. Its all daylight, no visible sources. I do think though that in the out door area its too bright.

Also the scale of the map is bigger which is good, beca 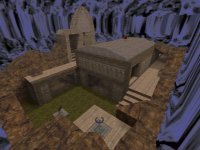 use b2s was too small for me. I like to be able to pause occasionally so I can scratch my arse. Anyway, its really not that big since you have just 3 distinct areas. The fiirst is the outdoor barn section, which has r_speeds which I just do not believe. Pretty low considering! Then there is the chapel type section and finally the area containing the LG and MH shown in the second shot.

Pingu mentions a freedom in the map. There are so many shortcuts and tricks available to you. rjumping from the RL onto the barn roof and then onto the quad is one such short cut.

1-on-1 is good, but I found a lot of hogging going on. I'd be controlling the MH and LG whilst my opponent would keep the Quad under wraps. FFA is better since it breaks up this monotony.

You're maps are the coolest !
Anyone looking for a good series of maps to play need look no further !