Back to Basics - Doughboy's Playground 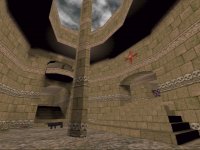 This is much better map that basic4 and thankfully does not suffer from being extremely cramped. Instead its made of a collection of fairly open rooms and corridors done up in an Aztec sand stone look. One of the floor textures is worth mentioning, its like cobble in cement. Looks good. The sky texture is also more fi 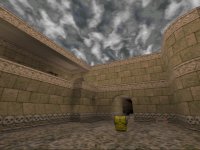 There are still the horrible looking teleporters which look very out of place in this style of map. There are also a load of dark spots at the end of some corridors. Its reasonably explained because there is a message which appears telling us its meant to like that, so people can camp in dark!

It plays rather well. Not much happens in the corridors. You’ll be in the open atriums most the time giving it some stick. Its a nice map but nothing really special.