Back to Basics - Blood Soup 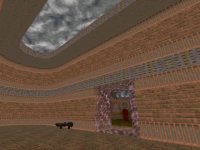 A change of direction then. Gone all the power ups and secret areas. We are given just what the map title suggests, the basics. Weapons, ammo, armour and health.

Style wise its fairly curvy and the predominant colour is orange. Actually it reminds of a single player map by Levelord. Some nice ideas here 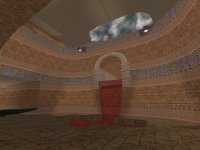 such as the pictures on the teleporters showing where they point to. Its been awhile since I've seen that. The screen shots show what I mean. Lighting is very very bright! There are some shadows but its almost r_bright in some places!

Play is very dispersed. I can't really see it supporting 12 people! I tried it with Kable and a few bots. The load was about 5-6ish, and this was ok. The bots had a tendency to swim in the blood pool (see second shot), but this is fairly rare occurrence.