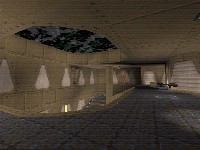 Tron releases his first Quake map. Its base style with a few of the textures from Aggressor by Tyrann. Its not your usual type of base map though, curves are once again used. Whilst its all done very well I can’t help but think that they just look completely out of place. Its just not something you expect in a base style map.

The layout of the map consists of three double layered atriums which are very closely connected. Lighting is good. There are loads of spotlights in the connecting corridors, and I think Tron has gone a bit over the top with them. Less is more =P.

In 1-on-1 the map plays pretty well. There is definitely a lack of health packs. I always had sub 50 health which is annoying! There is a MH but its hidden away!! This just means a little less time fighting and more time looking about for health packs. Weapon placement isn't too good either. A couple of spawn points aren't near weapons and you can sometimes encounter the opposition with only the crappy SG. Armour is also on the low side, one GA and YA. The yellow armour's placing is a litt 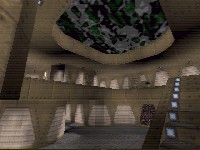 le odd. A more central placing would have been better.

Also just because I wanted to I've done a demo of the rjump to get the MH and Quad. This was like on my fourth, fifth, sixth attempt... its not exactly easy. Just imagine trying to do this during a game, the hole is only just big enough to get through! I wonder if Shambler can pull of a grenade jump to the same place?

Skorpion has delivered an Obot route for the map so make sure you have that.