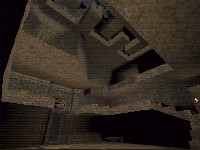 Mal has released his first map and lets just say its interesting ;). You have two atriums connected via corridors at the ground and 1st level, then a small corridor and teleporter on the 2nd level. It can easily be described as a very compact level. The texturing is interesting. The ground area has wood wall textures which then changes on the floors above to DM2 style. The surrounding platforms have a little brown/yellow cracked floor texture. Lighting is fairly atmospheric but maybe too dark in some spots.

Everything is very chunky and square and it all seems a little basic. Ge 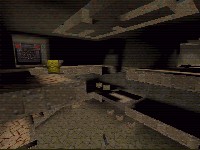 tting around the map is pretty easy but the lifts are a bit annoying, some other method of transport would have been better.

There is no RL (shock!) so its up to the trusty lighting gun to deliver the pain. Thinking about it though, things may just have been a bit too brutal and messy if the RL was in there. There would not have been enough room to fire it, without doing yourself harm.

I found it to be more interesting in FFA than in 1-on-1 even though its pretty small map. It does get a little packed with 4 in just one room but due the simple map layout the bots would scatter about the map.

Health is light on ground with just the MH tucked away underneath a staircase. As is some ammo. There are plenty of cells but not really much of anything else.

oh shit, I released that? man. heh. what about the other mal maps, eh? you know, the ones that I won't shut up about like lady and SWK? ;)