Heres a map that surprised me. In the email I got it said "This map was my first for general release it was designed for 8-10 player ffa which is the general format I play." I then get a funny impression of what the map may look like. When I loaded it up I was surprised at how good it looked. Its not really all that original but the execution of it all is very good.

Style wise its similar to Renegade's Curved Stone what with the grey with brown edging wall textures and curved walls. There is also an ikbase texture in there along with a few others. Sharp corners are almost gone with nearly every room and area containing curves. All adjoining corridors have curved roofs for added effect.

Everything seems very highly polished. Player starts and weapons all pads underneath them. They are also clearly identifiable, since the white pattern on them is slightly different.. The layout takes a bit of learning since the map is pretty big and most rooms are multilevel affairs. Most areas are very open with loads of space. The architecture is good and r_speeds are not too bad, it almost pushes the 800 mark in couple of spots, but for the most part its in the 250-550 bracket.

Lighting is good, but the spotlights on the roof (in the area in the first screenie) are a little messy. Not the lighting, but just the way they are placed. It would maybe have been better if there was sky light in here because with just a flat roof it just looks very plain. Another little niggle I have is with the circular lift, also in the same area, when it comes up to the ledge above it goes through the switch on wall. It does however line up prefectly wi 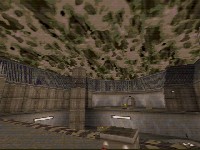 th the ledge, if it wasn't for the different texture they could merge together seamlessly

Movement around the map is very smooth and even before Mr Skorpion came up with a route file, the bots had absolutely no problems at all moving about the map. In fact it was down right spooky how quickly they got to know the layout. You are going to need a fair few peeps in and the suggested minimum of 8 is really that, the minimum. Less than that its just not that exciting. 8 is really the sweet spot. I really enjoyed playing it and spend maybe a little too much time playing it.

This map would make an excellent map for a LAN party for a big amount of people to play on, but you'll most likely need a fast piece of hardware to keep things going.

Skorpion has very kindly created an Obot route which will smooth things out =).