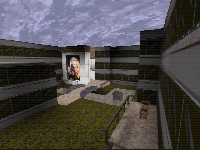 Deja vu anyone? If you played Duke3d then you'll know this. Its a complete rip off of one of the maps. The majority of it done up in ported Duke3d textures. There is also a picture of Pamela Anderson in her Barb Wire outfit. Kinda fitting I thought... crap movie, crap map.

The layout is fairly consistent with the original. The finer details are missing and some things are just in the wrong place all together. Also some rooms are missing. The scale also seems somewhat odd. Too small.

Playing the map was a fiddly process in that it was a bitch to navigate at times. Most of the map is just too small and with 8 peeps in its just daft.

Maybe if the scale was a little bigger and it was generally a little less cheesy it could be a good map...