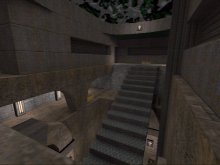 After seeing some piccys on Peej's site awhile ago I was looking forward to playing this map. I have not been disappointed either. This is the King of Strafe Edition of One Man Army, whatever that means. To us peasants its a remake of Strafin3 in Quake 3 Arena style with a very slight dash of Timeless. For all intense and purposes the layout is particularly identical. So is item placement, but with maybe a few more rockets, which is always good.

The centres around a three level atrium which to one side is surrounded by rock face. The first two floors of the map are q3a in style, similar to RF by Pingu, but with more high tech feel to it. The top floor of the map is decked out in the q1metal7 used in Timeless and is inset with a grey piping which works very well together. I have to say that the whole set works very well together, with the exception of the pentagram texture which, to me, looks very cheesy. Which brings me onto the lighting. Its all sourced either from standard wall lights or the dark coloured runes and pentagrams.

The first thing I noticed was how damn big the archways are. They're like at least 2 players in height. The map is generally bigger due to the more grander looking architecture. From the ground floor you can't rjump out, a grenade and rocket jump are required and since I'm crap at that I'll stick to the teleporter and stairs. Speaking of teleporters, this is the replacement for the only lift in the original map. Maybe this was down to the maps bigger scale and as such putting one in would have been hard, or that it is in keeping with the fact the q3a will not have lifts. Just to sidetrack for a moment. Something which I found to very odd, is that there are no ambient sound effects. The original has quite a few, not sure as to why this map doesn’t have any.

The map is extremely easy to navigate and I had no problems at all. Considering the amount of fancy pieces of architecture in here you would think getting around w

ould be hard, fortunately that is not the case. Its either well clipped or func_illusionary. The rock face around the MH and RL is completely clipped and I'm not sure if this is overkill or a preventive measure to stop camping. I did enjoy rock jumping in the original map.

This map is just as action paced as its descendant was, maybe too much so. In the name of research (hehe, like this kills me) I played Strafin3 again. To be perfectly honest, I'd never really played it before. The reason why, I don't know. Anyway I played the map both in duel and FFA. Then I played this map and found it to very similar. Both methods of play work very well and I could happily spend hours playing it. I also see no reason not to have this map, it boasts architecture which is sufficiently different enough for it to count as a new map. I actually prefer this map simply because the old ikbase textures aren't to my liking. Kable on the other hand, preferred the original stating that he felt that it was easier to move about and he thought it played better. There’s always one right? ;)