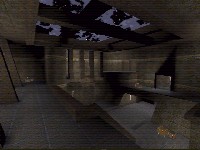 This is an odd map. You have this nice detailed fairly spacious central atrium which is then circled by a mish mash of cramped corridors and rooms. It seems like a fair bit of effort went into this main area in making its accessible and easy to move about, but not so much time has gone in the outer areas.

Lighting is ok. You have some nice shadows in some areas from roof ornaments and such like. However in other areas it seems 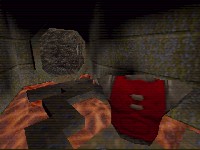 very flat like its just comes out of the walls.

In 1-on-1 its very easy to take control of the map. Keeping to the central atrium all you need to do is get hold of the MH then go and grab the RL near by then go into one of side areas to grab a YA. Keep circulating round that and you can handout bucket loads of gibbs.

FFA is a little more interesting. Play disperses nicely and to be honest the small outer corridors and rooms are not really a problem. You seem to be either following someone or vice versa. Again though you want to try to follow the same tactics as in 1-on-1 but maybe now go for RA instead.