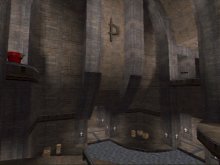 Well it certainly looks like Pingu isn't suffering from mappers block. This time we wave goodbye to the straw bails, medieval barns and chapels and drop in on Q3a territory. As per usual there are plenty of curves and some really cool epic looking architecture. Again it does have that huge cathedral looking feel to it. The texturing is mostly a two-tone job, with it intermixing between a light grey and a cream wall texture. The catacomb sections of the map are done slighting differently in a more recognisable q3a texture set. There is an interesting blue line which has been added into the map purely for decoration. From people I've spoken to so far, opinion on it is mixed. Its either a nice touch, which is what I think, or its like have damn tram lines telling you where to go. Maybe Pingu should have done one pointing into a wall, road runner style. It would have been pretty funny to watch some hapless idiot following it slam into a wall.

Playing this map wasn't much fun for me. Alot of jumping, hopping and pouncing about is needed to get around and something which is immediately apparent to me is that the Quake player is not a pissing Kangaroo nor does he possess a pogo stick. Kable on the other hand loved it. I have to say though that the jump pads are very well executed with the curved roofs firing the player up quickly and smoothly. Bots sometimes had problems, but you can put that down to their rather erratic nature.

Another problem I found was that a few of the items are not in particularly easy reach. A prime example is the MH, perched up high in the area shown in the first screen shot. To get that item you have to rjump onto the ledge which I'm on in the screen shot. Then you have to rjump up from there onto the MH ledge.This has the affect of making it a fairly unnecessary it 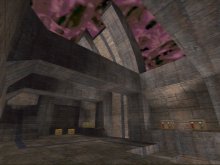 em to get. By the time you get up there you need it to put back what you'd lost.

Unlike Pingu's previous pieces, this is not a duel map. Its about 4 to 6 Peeps to make things interesting. I'm a little miffed at there only being one RL, but it does bring a welcome switch in the weaponry used. The evil quad is placed in some equally evil lava. In fact its in the only piece of lava in the map. The good thing is that once you grab it you are teleported out.

To be honest the map didn't grab me at all. The layout feels disjointed and as I've already commented I ain't one for jumping about. Then there is the fact that this map really leans towards the better player. In order to get the Quad or MH you have to well endowed to start with, which is pretty hard in a FFA map such as this.