The Ministry of Love 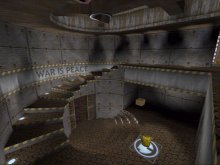 The Fat Controller has always gone for different looking maps (with the exception of rcdm3 which is a dapak clone). This time round he has gone for Stecki's Decon wad used by Stecki in his map, Peace and Love Incorporated. That was a beautiful looking map and this is no different. FC delves into Decon wad and uses some textures which have not been seen before. So in some respects it looks fairly fresh and original. Naturally he has added his own flair with a huge Ministry of Love logo and a few other slogans as well for good measure. I really can't fault the texturing, its very skillfully done.

The same goes for the architecture. The place is splashed with curves galore. r_speeds are pretty damn low too, but the reason for this is that things are fairly simple. The architecture isn’t very flashy in the main atriums, merely functional, but its done its in done in such a way that less is more, and that it looks really good. One area that I particularly like is around where on of the RL’s is placed. It looks similar to part of xl1dm4, with big roof supports which at the top curve outwards.

As usual though there is something I gotta bitch about. First up is the Quad. Now its placing is good, but the given method for getting it, is a little on the slow side. As you can see from the second screenie you have to press a switch, this then activates a platform which slides out from the ledge holding the Quad. It moves out at an extremely slow rate making it very unlikely that you'll get it that way. Further more though, even if you did try it that way you would not always be successful. You see, you can get snagged on the switch and be thrown off sideways. Then if I was to go on a little and bit very picky, the texture on it isn't perfectly aligned. Anyway, you usually find yourself rjumping for the Quad. As do those pesky bots.

This is not really a 1-on-1 map. Its too big for that sort 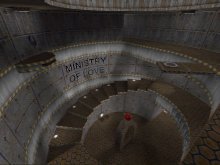 of thing. I did try it and found myself aimless wandering around. FFA is definitely the way to play. 4 is the balance here, but if you've had a bad day and really want some gibs to fly, try 8. The layout is such that you're most likely to bump into someone in the lower areas of the map. Gravity has the effect of pushing everyone down there. Also because the two RL's are on the ground floor I was almost always scrambling down there.

I did at times find that play somewhat stalled. This was probably down to the huge amount of telefrags occuring. Too many for my liking. It seemed to be a bot problem though. I think the reason was because one of the teleporter exits is just below a set of stairs (see first screen shot) and the bots would teleport out and pause for a second then move up. Other bots would pile through and cause big piles of gibbage.