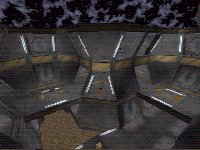 Already down to his 6th DM map, all better looking, better playing, more professional and who knows what else? Bal started to gain popularity after Baldm2, In The Vault, which a was a really 'nice' map, but didn't have the feeling Bal churns out today. Then, not so much later, he released Baldm3, Tainted Meat, which already noted and appreciated. Peej said that Bal was someone with talent, and you should really see what comes next from him. Then, well, it isn't so long anymore, Baldm4, Eternal Life. Successful. Baldm5, When The Beast Prevails. Succesful. And when I say successful, I mean people going around and saying things like, "Ooh, would you look at that." and "Say, this looks good." and then p1mping it on their site. And then you could also play them, of course. But with Baldm3, this came secondary, because of the looks.

So, what does it take, to make a good map. Take one room. One big room. Divide it to a few small sections. Add lifts, stairs, and a few platforms. Then, do some lighting, which makes it all look good and stuff. Get some armament it. And don't forget health and armor! Then, most importantly, throw in some players. For what map is good, if you can't enjoy it by playing it! It is quite dull running along yourself, except if you have imaginary friends.

Now, throw in... say, 3 other players, and you can start the serious DM carnage. Except that it's not that carnage, until you get 5 others in. Add more if you wish, but remember to divide your average amount of being alive by 2, whenever you add a new player. So, with 4 players, you'd stay alive for, say, 30 seconds, you'll only survive for 7.5 seconds with 6. Average amount of course. And it depends whether or not you kick ass. And don't bother with ammo, you'll get it. Sometimes even too much. And if you initially survive any fight, there are some medkits nearby, waiting to be used. Free advice : Get the RA, do not risk MH. Plus, there are several light armors all around, so don't complain you aren't protected! 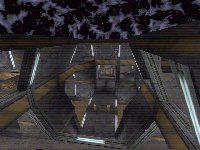 in this one. And a couple of GLs too. There, told you.

But what about the looks then? Baldm1-5 had from nice to awesome looks, so what's with Baldm6. Well, it is definitely very blue'ish. Lots of mainly blue Paroxysm's textures, with some black and yellow, umm ... stripes. Has some knee-deep water too. And some grates. But what Baldm6 would've really needed, is a bit more dramatic lighting. Now it's quite too bland. Well, can't have it all, eh? Then the sky is a bit bland too, it doesn't get your attention, but it doesn't shine out either.

More bad things, not with the looks? Well, the airlift is not so good being there, didn't like it all. And the map is very confusing at start, a feature which is present in 4 of Bal's 6 released map, until you figure out where the RA is, and you die a lot less. Of course, this is not such a 'bad' thing, it just may get on one's nerves. Not mine though, because the good outweigh the bad here, easily. So, drums, start, and scroll now all the way down, to see what score Uncle Vig has given to this work of art. Not that the score matters more than the review, on the contrary.
Vigilante