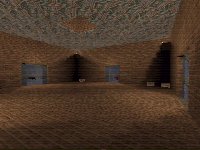 Can you believe that this map THE MOST downloaded custom Quake DM map on Fileplanet! Last time I checked it had 413 downloads. Thats over 60 more than Peej's Strafin6 which is the next nearest map. Thing is I really just cannot understand why because this map is just CRAP, pure and simple.

Here is the layout for you as described by the author : There are four corridors and one small drop corridor which you start off in. These connect to a big room inside. Each corridor contains a weapon and a piece of armour. Your chosen weapon will be one of the following, NG, SNG, LG, GL or RL. Armour is either Yellow or Red and there are two of each. In the central room are 5 health packs. There is not a drop of ammo so once its gone thats it. There are 5 DM starts one in each corridor (which all point against walls!) and one in the hole in the roof in the main room, which incidentally is a tad too high up so when you spawn you're stuck. This area also contains the LG.

1-on-1 is vaguely interesting until the lack of ammo creeps in. Upping the number to 4 is better. Things get going because there are enough backpacks to keep up your ammo supplies. But this still gives very lackluster boring playing experience.

The map shows a distinct lack of effort on the authors part in terms of design and implementation. I'd slap a 0 on it but you can actually kill stuff here so it does actually pass as a playable map.