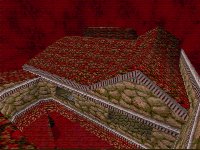 Darkness is CremaTor's latest offering, and I can't help but be a little dissappointed with this one after playing the excellent Madness, which the author released prior to this.

CremaTor has produced his own set of textures for this map, and they look pretty cool for the most part, although some of them are not exactly fantastic. When you first load the map, it's like, "woah"... I've never seen anything like this before in quake. Most surfaces appear to be blood-coated stone and metal, and there's also a wierd pentagram texture which is used as a light source. Satanic imagery is great in quake maps, we want more! There's also a blood red sky, and a bloody lava pit with bloody spikes protruding from it. Rivers of blood flow through the level freely. A very bloody (no, really!), unique looking map.

Whilst there's some interesting ideas and visuals to be had here, if you're looking for even remotely decent gameplay, I'm afraid you'll have to look elsewhere. This map is a beta release rather than a full release, and CremaTor has stated that he basically couldn't be bothered finishing it off. The apparent lack of thought which has gone into the item placement, 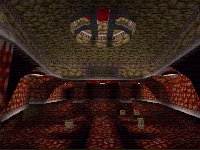 and the omission of powerups and armours, seems to support this. Also there does not seem to be anywhere near enough health available for the intended player load, either that or it's not in readily accesible locations, because I always seemed to have to bugger around for ages to get back to full health.

I don't really see how the map could provide an interesting game, given that with a small amount of players you'd become bored searching for the other dudes, and with a large amount of players you'd run out of items pretty quickly. Overall, a unique looking map which is worth investigating in order to look at the textures and such, but a forgettable gameplay experience.