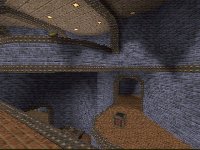 Well, where to start with this one? Basically, this is an excellent map! Unlike the other 2 CremaTor maps I reviewed this week, Madness is not about fiddly gameplay gimmicks or trippy visuals or anything - just good old fashioned rockin' gameplay.

When I said that this map is not about wierd-ass visuals, I didn't mean to suggest that CremaTor has ignored the aesthetics of this piece. I quite like the texturing and the architecture, both are reasonably simple but at the same time quite pleasing to the eye. The wall texure is a little blue brick number from the wizard set, personally I love blue so you can't go wrong with that one. A few of the id rune textures are used for the teleports, and the flooring consists of bricks in a couple of different flavours. CremaTor has also used some id metal studs as trim, and there's many metal arches throughout the map, which look quite cool. The only textures I didn't particularly care for were the light textures and the roof texture, the light one is just dodgy, and the roof texture inappropriate as a roof texture (imho of course :). Personal tastes aside, everything is perfectly aligned, rotated and scaled. Nice job.

The gameplay department is where this map is most impressive though. Whilst some people may argue that the multi-level arena type map is rather cliched, I'd argue right back that there's a reason for the existence of that cliche, and that's because this type of level is a lot of fun to play. There's a consid 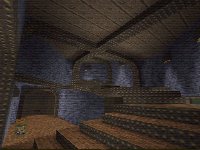 erable vertical element here, and lots of stairs and quick turn-arounds, plus multiple areas to fight in. Add it all up and you get an intense, fast match with plenty of aerial acrobatics, rocket jumping and general pure fraggin' fun. CremaTor has obviously thought about the item placement, and it won't take you long to learn where everything is and the quickest way to get to it. The RA is placed in a very vulnerable location, as there's 5 doorways leading into the area, so attempting to camp the RA is a rather dangerous proposition. The MH is pretty well placed too.

This map is great for 2-4 people, any more and it will get rather cramped, and the items will start to become a bit scarce. You'd get away with 5 or 6, I'd avoid going any higher though. Overall, this map is great fun, I don't hesitate to recommend this one.