Come and Get It! 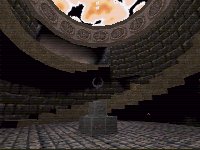 'Come and get it' is a very simple map, it's basically a circular central atrium with a couple of big rooms on the periphery. Well, it'd be a bit of an overstatement to call them 'rooms', basically they're bigass corridors which are more or less made out of huge rectangles. There's very little in the way of architectural detail - the map is very plain.

The texturing in this map is a little strange. Not the textures themselves, most of which are ported from Hexen2, they look great... it's their usage which is a bit wierd. Basically Rocketman has picked a texture that he likes for each section, and used it as the main wall texture for that particular area. Which is all well and good, except for the fact that not all of them are actually suitable as wall textures (for example the black altar texture). Nevertheless, most of the textures are properly aligned and scaled, although you will find the odd minor misalignment. Something which was a little incongruous... the texturing is predominantly medieval stuff, but the electric light textures and the style of the brushwork evokes a much more modern feel.

The gameplay is actually more enjoyable than I initially expected, if you don't mind playing in 2D that is. Apart from the multi-level central atrium, every other area is as flat as a board. Given the design (or lack thereof), the gameplay consits primarily of wandering around and fragging anything you see, with an occasional trip back to the middle to snare the quad. There's a decent amount of weapons and health lying about, and you tend to just grab whatever is closest and make do with that. If there' 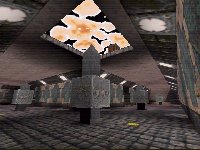 s a particular item you're after though, it won't take long to find it, because Rocketman has clad each area in its own unique texture, so it's fairly easy to remember where each major weapon is, even though every room just looks like the same big box. :)

It's more fun than you might think, especially when you grab the powerups and go on a quad rampage. Watch your enemies scatter in panic as they realise they have no protection against you (there's only one suit of armour, a YA, in the entire map). I'd suggest you'd want 3 or 4 people minimum here, up to 6 should be fine, you might even be able to squeeze a few more in. Overall, the map is pretty uninspiring in all departments, but it is a remotely decent play to I can't write it off entirely.

You can also get a version of the map with builit in a omicron route.