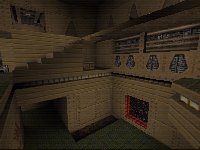 Those with memories (the type doesn't matter) may remember Misyu's last map Compl3x. Now I'm sure the author will agree that that map is pretty shocking. Well in the four months since then, some time have been put into improving his mapping skills. What we have here is also another Base style map but on a more compact scale. This map as a whole is a vast improvement. The use of textures is good with everything being nicely aligned. Plenty of detail and my own real niggle is the rock walls which look a little too flat and organ 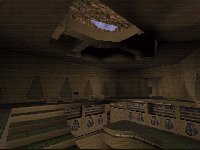 ised. It looks like someone has built them instead of being naturally formed.

Now if you manage to jump up into the support bars in the roof area shown in the second shot you get a little message saying "Gre4t jump m4n". I tried to rjump into that area but couldn't for the life of me do it. If you can then email me =).

Its a bit of cheeky chimp in the play department. Due to its size 1-on-1 is prefect here. Against a player who doesn't know the map very well you can very easily hand out a real whipping. Against an even opponent though its a different matter. There is an amble amount of items to keep both of well armed up. I also tried it in FFA with 3 and 4. 3 is about the maximum here. Anymore and you'll be a little too cramped.