Baldm5 - When the Beast Prevails 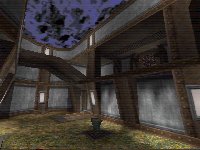 Now this map was never meant to be part of the baldm series, it was originally meant for a map pak being put together by Killjoy. Unfortunately though it never went ahead. According to Bal the map is older than the good old qboard! After a little bit of searching I found I still have a copy of a crusty old beta from back in Janaury =).

Since that beta there has been a re-jigging of the items and some cosmetic changes. Now the style of this map has come from a set of textures which Killjoy created. It looks extremely cool and looks in some respects similar to ukpak4.

The map is made up of 3 double/triple floor atriums which are connected via a network of teleporters and corridors. There is also an underground section which is littered with wooden crates and boxes. The teleporters have a pretty cool design but I really hate the pulsating light they give off! It adds nothing and then only thing it does is piss me off 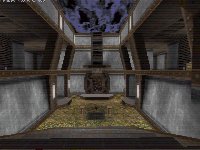 . Another thing I quite liked was the grey grating which ran along the walls in certain areas of the map. I did noticed though, that their texture alignment was pretty shocking =P.

Playwise its another FFA map due to its size. 6 is what I found to run comfortably and gave the most interesting game. I also suspect you could play this map in teamplay since it is split up into different sections.

Guess what? Yeap, you got it, another route file as provided by Skorpion.