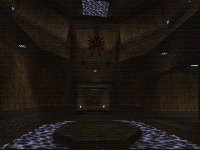 After a couple of weeks Hot Cakes reappears with the third map in his HCDM series. The first thing I would say is not to let Frib near this map because we all know how much he hates brown, and brown is something this map has by the bucket load. But that doesn't bother me =). Theres a bunch of custom textures used here along with the good old head_mt7 by Headshot.

If you've seen the other maps in the series you'll have noticed the little quirks and nice touches that are always present, from the weapons on the walls in HCDM1 to the Falling People sign in HCDM2. Theres nothing that funny here though. Its more like original or new ideas this time round. The first are floor mounted buttons which are in the centre of all the lifts, which when you stand on the lift rises to reveal a square hole in the centre where the switch was. There is also an over abundance of blinking, flashing lights, maybe one or two less would have been better. Finally there is a platform in water which by the use of funt_platform entities gives the impression that its bobbing up and down in the water. Very cool!

The layout is a little hard to explain and as such needs a little bit of learning to fully grasp. The Obots do seem to have a little trouble wi 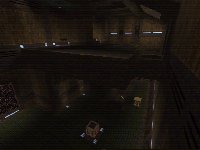 th the map, the problem being the water. Even with a route file, which Skorpion kindly provided, you still have problems. Maybe if this water section was reduced then the map would be less problematic for our bot friends.

I, unfortunately, spent quiet a bit of time wandering about looking for weapons. Some are placed near to DM starts where as others are not and you really need to know the map to be able to get them quickly. The amount of peeps in here is going to be around the 8 to 10 mark due to the maps size. I tried 4 but it wasn't up to much. I didn't try teamplay but I think it would probably work pretty well here.