Peej's latest map is an amazing piece of work. It has some of best architecture you're ever likely to see in Quake. The theme which was used in Strafin5 - Infinite Skill has been carried over and once again used to great affect. The architecture is just as detailed as before but its more curvy and generally a little more interesting. As I've said with many maps before though, you can't stand around gazing at your surrounding for long because you'll end up with a rocket in your back....hmm... actually its more likely to a lightning bolt in the back in the case of this map =). More on that later.

The layout consists of huge multi-layer atrium with walkways interconnecting up and down via stairs. This time lifts are out and teleporters make a reappearance in the series. Here though it is necessary to include them, otherwise the only path from the bottom of the map to top would be via the walkways. Also the layout seems a little more focused and centralised this time round. Strafin5's layout did seem to sprawl out a bit.

The weapon load in this map has caused some conversation on the qboard and for good reason. There is just one RL and its placing is a little out of the way. This is further compounded by the placement of the LG which is at the bottom of the main atrium. So it is very accessible. I personally would have preferred for their placement to have been the opposite way round. I did find though t 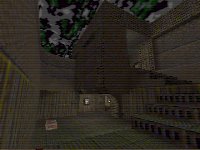 hat there really wasn't a dominant weapon. I'd be constantly switching weapons and it was weird because it didn't seem to stop me from racking up my score. This kind of thing seemed to be a regular occurrence for everyone playing.

Weird weapon placement aside, it still provides an excellent fragging arena. 1-on-1 is a little too slow for my liking and I found the good old FFA providing the best game. Peej's recommendation of a maximum of 4 is spot on. The centralised layout gave a really fast game and I had a real blast playing it!

If, like me, you use the Omicrons, installing a route file made by Skorpion will vastly improved how the map plays. Without it the bots show a complete lack of intelligence when it comes to getting the RL.

The PQ-CDRom link won't work, and I get borked links from peej's own page. Grrr...

or just go to
http://ftpsearch.lycos.com and search for 'strafin6.zip' it'll bring up a few more mirrors