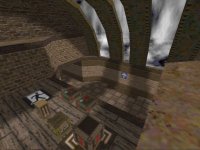 Aard promises that this is his last ish map. Well this is certainly a good way to end the series. As with the the previous ish maps the premise is simple, take already existing maps and add the magical Aard touch. The patient this time round is e1m2. Now to be totally honest and up front, I don't particularly like that map. So as such I'm a big fan of this map either.

As far as looks go, I really can't fault it. I like it and subtle autumn shades work really well together. The layout is almost the same as the original, but it is better connected. Gone is the start and end areas of the map to be replaced with a small room containing crates and a very cool looking room with a curved ceiling, which is shown in the first screen shot. This incidentally is another one of those famous jump pads. Its very slick and gives you a very quick, sharp push upwards. Its also a lot easier to move about in this map due to it being slightly more compact than the original.

My grudge against the map is how it plays. Its a more tactical slower type of game than I'm used to. Part of the reason is the placing of the weapons. The RL is tucked away in a little room which can only be accessed by going for a quick swim. You're more likely to be using the nailguns and the SSG. The GL is pretty easy to get but the ammo is a little on the low side to sustain continued fragging with it. 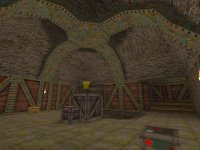 r me it required a slight change in how I played, I had to take things a little slower. Its not an action paced game but it is enjoyable. 1-on-1 against a bot is a little boring due to the bot’s love of watery areas. Against a human opponent it was a lot better. Quick shoot outs would take place after which would be a brief quiet period of restocking, then fighting would continue again. FFA is also similar. Obviously more is going on due to the bigger numbers involved.

Teamplay will most likely work very well due to item placing. The good items can be easily protected.