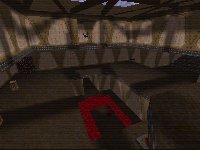 Oh dear. My second ever RocketMan map... and.. well, it's better than intENSITy. Apparently it's based on efdm5 by the rather good mapper Mr. Fribbles. Yeah, I can see some sort of resemblence in the Quad room, but nowhere else.

Once again we have a load of square rooms connected by boxy corridors. The lighting isn't quite as uniform, and there's a button that changes the sky from day to night (as well as dimming the light near the windows). However, the map is spaced out, connectivity is very poor, there's tricky little ramps to ruin the flow of the game.... basically it's just not very good.