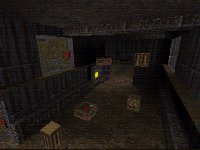 I'm unsure as to which particular style this map is meant to done up in. Its as if you have a pick and mix selection of textures and the author has just been greedy and picked a bit of everything. Weird texturing does not make a bad map though. Theres more...

The maps name implies something weird as well. Its the effect of a two floored room with the upper floor being clear so you can see and shoot the players below. This reminds of the effect you could do back in Doom by inserting a sector inside a 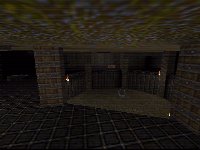 sector and inverting the linedefs. There is also another Doom type effect. In the right hand screenie you can see an octagonal area containing the quad. At first I thought you'd be trapped in there when you get it. However, the blue texture covering the lower area is fake and you can walk through it.

Anyway its a nice idea. Problem is the map is very cramped. Its as if its been made for the player to just fit. The architecture is similarly odd. The different styles don't seem to work together.

Playwise it redeems itself enough not to make it a 0.5 map. Ammo is widely available as is weapons. There are loads of them! Its best played with 4 to 5 in FFA type game.