A2 : Return to Atlantis 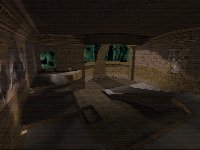 Those with long memories may remember the first Atlantis map, The Place from Atlantis. A2 is the sequel to that particular map. In one respect though, it could be seen as the sequel to DayDream, since its of the same style and look. This map has been a long time in the making (not that you'd know that) and to me its been worth the wait.

The architecture is excellent. Its looks superb. Unfortunately the knock on affect is high r_speeds. The area shown in the first screenshot peaks at about 830. So you'll need a decent machine. Lighting is good. Very atmospheric.

Its been designed for 2-on-2, and it plays extremely well. Since 1-on-1 is my preferred type of game, I tried it at that. That too was top notch. You could maybe get a little too much ammo but thats not really a problem. Its easy to get a flow going. Keeping tabs on the MH, YA/RA and quad will see you nicely in control. A bit of camping is possible (see second shot) around the RA and quad but its not too muc 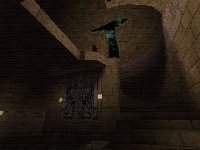 h of problem. Dropping in with the LG will soon stop that though =).

Like Bless to Kill the map includes a push trigger which fires you up into air. This time though its a little more powerful in that it pushes right across the room which is shown in the left hand screenshot. You come up just to the bottom right of the picture and land just next to where the YA is. Its quite a ride!

Good old Skorpion (I mean that in a nice way =)) has done a route file for the Omicrons, so I'd recommend getting hold of that.

Maybe not THE God... but A god...
This maps rocks ! As do most of your maps !
Thanks again for all the great maps over the years !