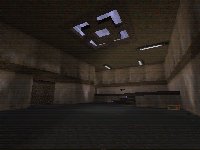 I beta tested this map a while back. I thought it had dissappeared until Mr Ed emailed me. When I tested it I mentioned a couple of things that could be changed. Like the teleporters. They're bland. Some kind of framing would have been nice. Also in the second picture you can see some bars in the top left corner. They just look out of place. What has changed though is the inclusion of transparent water, which is good thing.

I noticed a fair few clip brushes a 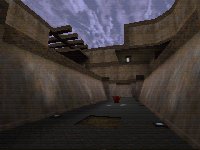 re used because in parts some bits of the architecture jut out. I'd try to walk into them on purpose but would gracefully slide past them.

Niggles aside, its an enjoyable map to play. I found most of action took place in the area shown in the second piccy. I think with a higher player load its better because of the size of the map. 8 to 10 is about right. For a change the dominant weapon is not the RL, I'd be letting rip with a variety of weapons. This is probably because of its placement, you can see it in the first picture. This area is over the other side of the map. The Quad is also around this area and I did notice it wasn't used very much.