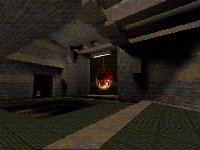 The structure of this map is a set of closely bunched up rooms of varying sizes directly connected to eachother mostly without resorting to corridors, as such the connectivity is very good, there's a lot of space so it fits more players than similarly sized maps, yet you can still get from A to B quickly. The only downside of this compact connectivity is that many rooms see into each other and so r_speeds tend to shoot up now and then.

Texturing is a bit uniform but very precise and detailed. The architecture of the rooms 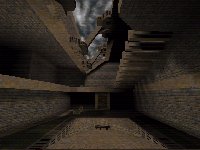 is where this map stands out, it's varied (every room has its own feel to it), and it has some of the most original roofs I've seen in maps for a while. The whole atmosphere is refreshingly different from most other maps.

Sadly, it doesn't play entirely smooth. The list of small "features" which make the map feel fiddly is endless. There are many places that get you stuck or atleast hamper your navigation which is highly irritating in the midst of a battle. As an example there is a rocketlauncher in a lower bit of the floor which gets you stuck depending on which direction you run out of it. Many of these problems could have easily been fixed which would have made the map so much more playable.