Warfare2 - The Quick and the Dead 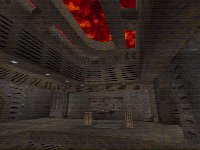 Onto much nicer pastures now. Gonzo's second Q1 DM map looks rather nice. He's used mainly Q2 textures to create a space station, and he's pulled it off better than most. There's curves here and there in the ceiling, the lights are used to great effect and the attention to detail is very high.

Beauty comes at a price though, and this level has a high polygon count throughout. Most of it is over the 500 mark, and near the top RL it's 750... you need a big PC to run it smooth. I'd keep it to LAN's only, as over the net it's gonna make modem's smoke.

So how does it play? We'll it very layered, 3 layered rooms are common place here, lifts and teleports whisking you quickly from level to level. It's quite a big level, 1-1 is possible (it was designed for 1-1 apparently), but IMO it really needs 4 - 6 players to get it going. 1-1 games seemed a bit too roamy, with the sound triggers not giving many clues away due to the maze like layout (finding where the sound came from can sometimes be damn hard). Learning the level helps ten-fold, but most people want a very accessible level to jump into.

Extra niggles began to annoy me as I played the level. There are too many slowing down points in the architecture. To make it so you don' 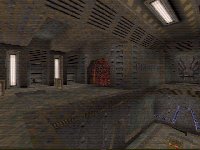 t get stuck everywhere Gonzo has clipped left right and center, which slow you down if you get pushed into them - something which occurs a lot. The passages in the lower sections are quite narrow, and shots from above bouce you all over the place. This also makes it a grenade spammers paradise, which annoys the hell out of me.

Lastly playing in standard software is a no-no, the textures just mush together and you can't distinguish where the ledges are. If your PC will do better than 320x240 in software then you might have more success here, but for me I'd rather stick to GL.

All in all an impressive map, but the flow was too disrupted for me, making it feel like just another map and nothing special.