GomDM3 - Imaginations from the other side 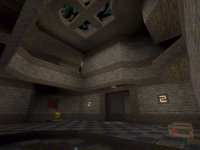 This map boasts the longest map name I've ever seen! That aside its decorated in manner very similiar to that of Danimal's Knight Takes Queen (Rapture2). There are obivous differences such as the dapak strips on the teleporters.

Like Gom Jabbars previous map, Hammer Down, I love playing this map. It provides that feeling of you just can't get away. 1-on-1 is more slower game that on Hammer Down, but this is because of the increased scale of th 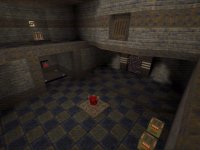 e map. Where this map really gets going is with the max of 4 players. Armour is placed nicely. You pick it up whilst naturally walking around. Ammo is also in enough supply.

There is one player start which bots get stuck in. Normal players don't, but when bots spawn they do. Anyway, this guarantees you at least one frag =). The Quad is nicely placed and with a little thought you can work out how to get.

Something I notice on better maps is the lighting. Its used to better effect. Instead of just lighting a room for the sake of it so you can see. Its done to highlight objects and areas and to give some atmosphere. Spotlights are used and are most noticable in the Quad room.

Does this really have a score of 99? The review doesn't seem to indicate that it should be in the top ten, and no real score is indicated.

It would technically be known as a fuck up. Gom Jabbar emailed a couple of days ago asking for the dl links to be updated. And I did, but I lost the score. Not sure if it was a 4 though, I will check my local copy of the site at home (since I'm at work now) and will correct if it needs to be. Also I shall get rid of the 99 bit.

Thanks for the heads up on that.