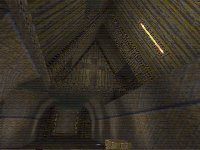 Take some of textures and architecture of Celebrity Deathmatch (Strafin4). Mix in some gothic architecture and the result is this! Peej commented that this is his best looking map yet. I totally agree. The architecture in this map is brilliant. From slanted rooms with metal suppport beams to curved metal arches. The screenshots I've taken don't do it justice. Lighting is provided by high tech style lights. A few spotlights are there to high certain spots. I found there was that sort of dark atmosphere similiar that of Effigy of the Forgotten by Moloch. Its sort of darky and moody.

The layout is a departure from his previous map. S4 had a fairly flat layout. This is more vertical. There are three multi-level rooms. Corridors interconnect all these layers together. Another departure for the Strafin series is the inclusion of a couple of teleporters. This has the usual effect of breaking up movement around the map.

Looks aren't everything though. So how does it play? Well 1-on-1 was pretty cool. Against a bot it was a slow game. Duuno maybe the bot was acting dum that day. Anyway against a human opponent it was a game of domination over a couple key items, namely the red/yello

w armour and megahealth. I also tried a few FFA games. 4 was best I found. Any more than that and it was too busy. On the whole I found it a really enjoyable game if you could keep an eye on either of the key items.

So is there anything wrong with this map? Well some the metal supports look a little wierd when they join together at certain points. The textures aren't aligned so they match up, but I can't see how that could be done. Maybe covering it up or something. Also a couple of rooms aren't connected very well. Only a couple of exits out of them. The MH room only has one way in and out which can be a problem. Also there's only one lift which I thought was little odd. Just looks out of place with the rest of the map.