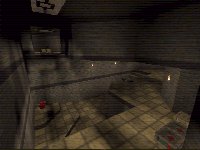 Been a while since I've seen a map in the DM5 style. Makes a pleasant change. The texture set is used well and looks good. The general feel of the map is dark and moody. Lighting is done is such a way to give shadows, but not so dark you can't see were the hell you're going!

I think that this map is prefect as a 1-on-1 map. Its too small for a lot of players. So in a duel it was damn good fun with lots of circling round the map, picking each other of from high angles.

Theres plenty of ammo. The armour is nicely placed. You should play deathmatch 3 to stop domination of the weapons.