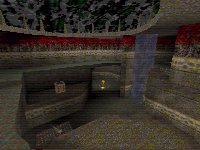 This map is the second in the Land of Nod trilogy. The first map, Insomnia, was reviewed last week. A complete change in style here. More of an evil hell type look. Theres the odd misalignment with textures, nothing major. Lighting is a little wierd. Given its dark texture set and grey sky texture you would think the lighting would be darker, with more shadows. It would definately add to the atmosphere.

Like Insomnia the architecture is unique. Its different from the maps I've seen (thats quiet a few!). What I found wierd was the tube of water (left hand shot). It sometimes got in the way in the middle of a fight. You'd back into it and your movement then slows down, because its water, so I'd get battered. It was funny after a while though, having piles of gibs and bodies in there =). Also the layout seems a little cramped in areas. One corrid 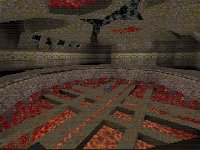 or is only wide enough for one player to go down and the area in the right hand shot is another place where movement can be a problem. To get to either side of the Quad Pit you have to walk on some thin ledges, in a fight you can be easily knocked.

Play is fast and furious, which matches the other map in this trilogy. Theres enough of everything to sustain a lengthly 1-on-1 match. Nightmare is a good map, but its layout is tad cramped in parts which can be annoying! Pingu recommends you play deathmatch 3 for the best results!

I like this map because it's so different looking. I just can't seem to play it well. Like Paul, I found the water column annoying and out of place. I've noticed when playing humans that the lave arena is shunned, for good reason, there's no advantage to be there. Although I like it's style, this is my least favorite Pingu map, but then it's probably because I haven't figured out how to play it well.