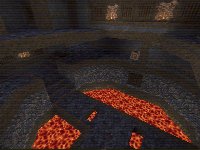 I really like this map. Its refreshing to see something so different looking. The contrast of the bright orange lava against the blue walls is damn cool. Theres some nice touches here, such a machinery in indents on the wall to show lifts are nearby. The layout is that of four main artiums linked via a small room containing a red armour (right hand screenshot)

This map plays really well. Battles take play all over the map and I found 6 was best here. The map could do with a little more ammo in places but is nothing major.

The author mentions a "trick in the lava". I don't want to spoil it but lets just say you would stay in the lava long if you work it out!

For those that use the Omicron bot (which is me) Vondur has created a version of the map which has built in Omicron support, click here to download that version.