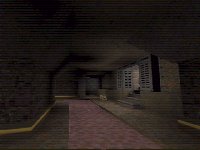 You'd be forgiven for thinking this is a Quake 2 map at first sight. The map is entirely decorated in Quake 2 textures and is also Quake 2 in style. The only thing missing is the coloured lighting. Some of the architecture seems a little wierd, nothing too strange though. The layout of the map is based around a huge main room which has an enclosed corridor in, which is shown in the second screenshot. The texture set is used well and I didn't spot any misalignments.

Ignoring its Quake 2 looks (which I'm not a fan of), it plays well and theres plenty of items to keep a game going. I recommend 8 players to get things really going. 4 was ok, but you'd be wandering around abit sometimes.