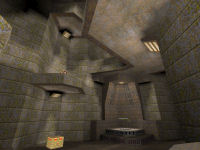 After all these years that our beloved Quake has been released people are still coming up with fresh maps using standard id textures. How? I'll never know :) While not being exactly original or detailed, Bovine excels at having a very fresh design to it's atriums. This obviously helps the id metal textures a little.

It's a small map recommended for 1v1 or 5ffa and is quite tight to move around in. The platforms and walkways all seem quite thin and occasionally end abrubtly just to make sure to keep you on your toes. There are some very good ideas such as having the red armour on the middle of a 3 stage platform; meaning that you have to drop down to grab it or decide whether it's work a rj upto it.

The map seems to be very well interconnected with various lifts and teleporters scattered around and this manages to keep the map constantly flowing at a high speed. In 1v1 i found myself always having to watch my back and every other side of me since i never knew where my enemy was. very fun i must say :) non-stop rocket action is helped by having the standard duel-esque 2 rocket launchers in the map, but alot of the time was also spent hunting around for weapons since against reapers it was pretty deadly if i ended up on the ground floor.

Playing 5ffa was crazy, but also very fun too and didn't seem too cramped as i thought it might feel in a map of this size. Onto the bad points about the map. Not that there was anything terribly poop about it but i 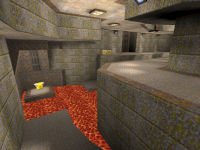 can't give a perfect score now can i ;) There seemed to be alot of steps in the map when they weren't really needed. Especially single ones or the small triple steps which can slow you down annoyingly if you're blown against them by someone. In my opinion they weren't really needed and not that they really get in the way that badly, but i always try to jump up them and stop which then irritated me a bit. Although they do look quite cool ;)

The other thing is that the texturing and look to the map is a bit bland. By today's standards the map is undetailed and could use alot more variety in the texturing; but all in all while not being anything blindingly new, it was pulled off very well with the odd shapes of the atriums to give it a more newskool look, while still providing some hardcore oldskool action :) good job!

thx for the review, card :)

another sweet, smooth and polished map from laerth

it's a great little map laerth :) my pleasure reviewing it.

it's a great little review cardO :) my pleasure reading it

the plural of penis isn't penis'es, is it?

Any idea where to download the rest of Michael "Laerth" Daugherty´s work? He states that he made 20+ maps for quake1 in readme, but Bovine is the only one to be found on the net. please let me know, icq 259689233, mail mailto:[email protected]?subject=Arrgggh don't email me!?, thanks a lot!!