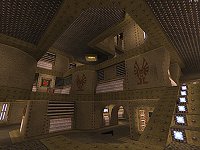 Biff0r! Biff Debris returns with a new masterpiece for all to behold. "Daedalus re-visited" is a stunning piece of work, an ultra detailed and superbly lit idbase textured map that restores my (and many other peoples) faith in the idbase texture set. Gorgeous curved adorn the multi-tiered map and cool spotlights reach up the impressive architecture, it truely is a joy to behold.

Gameplay is fantastic, and I 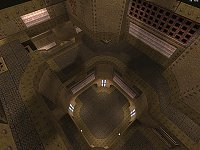 am able to speak 1st hand about this, thanks to RPG's custom map server. All areas of the map are used brilliantly, with a superb 3d element to the gameplay, just the right amount of weapons and armour even out the playing field. And the only true advantage you can get over your opponents is height, it counts for a lot in this map.

Added cool touches are little holes in lifts that you can pop grenades through to spam the people below, and a nice quad secret that took me a while to find (to the amusement of Cardo and Biff...).

One sentence to sum this monster up : GET IT NOW! :)

I loved this map, aswell as the q2 vers that it originally was intended to be but shall probably never be released :D

One thing the R_speeds get st00pidly high at points. While this isn't a problem with me, I'm just curious as to how much R_speeds affect reviews and their relative scores these days. Apparently not Much :D

I just hope being able to kick my workmates ass during lunchbreak in Dadaelus Revisited today. Playing versus bots is so unsatisfying...

How do i play on it?

...how come the biff-meister gets to jump the que? It's favouritism like this that makes me BIFF!

This map is totally sweet! Excellent detail and highly intricate layout. I like the lift buttons being on the floor, it seems so logical and works so well, how come I didn't think of it? I found it hard to pick up the MH without excess camping.
I'm puzzled by the secret teleporter. You shoot this pannel, go through a teleporter and end up in this little room. I looked around expecting to find a pent or quad or something...but no, it's just a little room. Is that the quad secret you reffered to DaZ? How come I didn't have a quad? I just had a little room. I mean, okay, little rooms are fun (It had these bits on the floor that move and some stuff on the ceiling and things) but it was just a little room. No Quad! Just a room! A stupid small room with me in it looking like a loner and having no friends! Jesus!

Were you playing alone? Maybe someone got the quad before you did.

once again congrats on an excellent map biff :) i enjoyed every second of testing and playing the map. It's amazing to see how much u developed it from ur q2 version. spoogage. i wub it!! :D

Unless there is noticable slowdown then I don't usually check r_speeds. Although I did with this map due to the excessive use of curves :D. I assume that people aren't running Quake on P160's with 4Mb Voodoo's anymore. Machines now can handle higher than what we'd call normal r_speeds.

Nice usage of my textures =) I still think it needs a LIT file, though =D