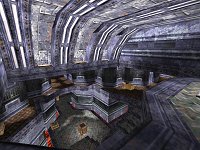 After seeing the map name, Amen Ra, I was expecting a map dressed in Egyptian textures but it’s quite the opposite. Amen Ra is placed in a more industrial, space environment using some blueish Unreal textures, which I haven’t seen before in a Quake Map (unless I missed something?). Personally I don’t like the textures that much because they are a bit too blue but that’s just my opinion.

The map consists of a one, three-story, atrium with corridors connecting the whole thing up. There are no teleporters, no elevators, so loads of legwork is required. To show how small the map is; I’ll go through a quick walkthrough of the map starting on the bottom floor of the atrium at the MH.

OK, let’s enter the corridor in the opposite direction of the stairs, follow it, grab the RL and you end up directly above the corridor you just entered on the second floor of the atrium. Jump to the left, take the YA, keep right and follow the corridor to the ledge with the GL, the third story of the map. Leave the ledge on the other side where you can take the NG and you’ll arrive on the second floor of the atrium again. Jump down top the bottom floor and take the corridor next to the stairs for the SNG and to get back to the previously grabbed YA. That’s about it. I told you it’s going to be a quick walkthrough.

One thing that needs to be mentioned is placement of a particular item, and that is the Quad. It’s situated in the lava below the stairs in main atrium so if you hear some screaming, fire a few rockets in that direction. 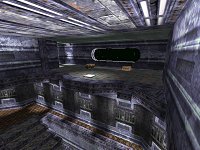 for some intense 1-on-1 DM action although it seems like it’s rather too easy to dominate. Once you are loaded (especially with the RL which works really well at hunting down your opponents in the small corridors) you just have to take care that no one is able to grab the MH and the nearby Quad.

I already told you about some of the looks, the textures to be exact, but what about the lightning? Well, Amen Ra is lit quite well, you don’t have any spots that are too dark for example, but it’s not used for dramatic effect, more functional than anything. A bit of atmospheric lighting would have fit this map really well. Anyways, taking the previous Quake DM Maps into consideration, the lightning work is definitely a step to the right direction.

I suggest you download it and give it a try. Even if you’re not blown away by the map you won’t be disappointed either.

I've only looked at the shots but it looks pretty sweet from where I'm sitting.
Never seen that texture use before, and the first shot looks to have quite a complex layout. Is that a scaled up lava tex I spy?

My puter caught fire two days ago so it'll be a while before I get to play this.

I quite liked this map.

I played long hours of 1v1 in here against a friend of mine. and it was thouroughly intense (when we weren't goofing around)

... someone put UT to a good use. Texture resource ... well, for a one-time fresh look they are good enough. :)

If you guys would read the readme.txt Files coming along with the maps you wouldn't ask... ;)