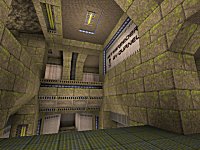 Secondly, connectivity throughout the map is remarkably varied and hassle-free. Just about every area is overlooked by another and is accessible in various ways. Lifts and teleports are put to use well, and aerial leaping between ledges is common when running about the map. Rocket-jumpers can rejoice too, with trick-jumping often providing a nifty shortcut or two between floors. The verticality is at no point extreme, but many sections provide plenty of 3d gameplay, often putting the GL to great use. There are of course tighter, more enclosed rooms and corridors though, which provide extra balance 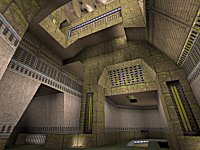 between the available weapons. Good usage of dead-end sections has also been made to add further variety to the gameplay. Layout-wise, several have compared it to Peej's awesome 'Strafin' series, and although certain influences are recognisable, no areas are distinctively reminiscent.

...but I have never really taken into account what other people would think. I would just write what I thought about a map. I am of the opinion that a map should both look good and play well, which seems to fit what with most people think (more by coincidence than design though). The only balancing I've tried to do, is to make sure what I review isn't out of whack with what I'd written before.

I know it, i miss the hats, where are all the hats?

I'd do that anyways

Ok, that post above was written after a horrible day at work :)

well imo it is a 5/5 map as the playability is great and the layout really does flow perfectly, when I judge maps its always really the playability tha grabs me, and I really only notice the looks and lighting if they are made to be seen, ie- look stunning. If the maps build quality is medicore then I will in most cases judge the map on playability, layout, items etc and only give looks a very small margin for changing the score.

I think this way works best (also imo..) as then all maps that play well get the recognition they deserve, a good example is some of parboil's maps, getting 3/3.5 out of 5 because they well, even though their looks are very dated.

All a biffa like you loves is tga textures and arse fog.