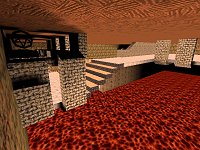 Prepare to put on SPF 50 sun block and some shades because it’s kinda bright. The source less lighting looks over lit and the light coloured walls and floors further enhance the effect. The layout is that of a medium sized room with a circular path of semi floating platforms connected via stairs. Bubbling lava makes the set complete by filling up the lower section of the room. There is an attempt at some castle style architecture, but it doesn’t add any value.

The thing that tickled me is that when I took the screen shots for the review I didn’t notice that in the lava (yes in the lava) are the following: heath pack, small rockets, RL, RA, MH and last but by no means least the Quad. I can only surmise their inclusion is similar to that of a certain unreachable Quad in this thing, i.e. to piss the player off. It works. I suppose it’s a taste of my own medicine. Anyway, there is the slimmest of chances of getting them by snagging the Pentagram of Protection, but that isn’t eas 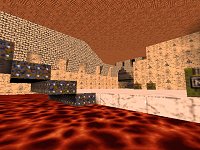 y. Plus I don’t think you can get out of the lava once you’re in…

So given that the juicy stuff is as good as useless, what are we left with? A SSG, NG, SNG and GL, each of which has been cunningly placed near ammo that isn’t of the same kind as what the weapon uses. There is however, given the maps rather titchy size, more than enough ammo. The same cannot be said of the health though, but as the author points out:

"It is a test of skill as there is no health."

#1. Speeds is afraid of typing too much ^

crap of the year (2001) award (I`v already checked all the maps here).
you even paleyd it Paul ? LOL

I was gonna review this POS, but didn't submit my review in time. My apologies to Paul for subjecting him to this.

Don't blame that guy too much, coz maybe it is his first map.
Maybe he'll grown to CZG or Frib?

My first map was beter :)

i'll release my first map soon.. then maybe we can compare? lol

The nerve of that guy to release shit like that! I'm gonna vomit now...

wow, even THAT has a better design... :P