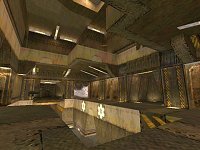 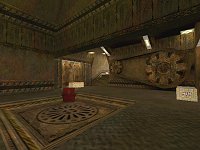 into other sections quite as expected. Along with that some architecture doesn’t look right within the context of the theme, but it must be said this is a minor complaint. There are some very cool looking set pieces that show off the industrial style textures to good affect. I did find a couple of snag spots in the heat of a game which were a bit of a hindrance.

I reviewed it here:

...if anyone wants my opinion. I described the map as good looking but deliberately didn't mention the enhanced features so the review would be more comparable with others.

The layout was definately a step forward from previous maps (that's not to say crdm2s predecessors were bad, this one is just better).

When the new RQ gets finished and us lot fuck off over there, mpq's gonna be be left kinda empty, huh? :)

And then I will be able to carry out my evil plans. Mwhahahahaha...